Martin Katz in the Controversy section of INHN stated that Fred Quitkin started a controversy by claiming that the clinical actions of antidepressants lag several weeks behind the drug’s initial effects on the CNS. It might be helpful to recall the background of that particular 1984 study (Quitkin FM, Rabkin JG, Ross D, Stewart JW. Identification of true drug response to antidepressants. Use of pattern analysis. Arch Gen Psych 1984; 44: 259-64).

Each of 185 patients were administered weekly Global Improvement Scores while receiving placebo or medication double-blind. The question was whether there was some trajectory peculiar to drug treatment. It seemed simplest to dichotomize these scores, to either zeroes or ones. This meant frank remission or unimportant symptomatology without dysfunction was rated zero, and all other scores, rated one. Since there were five weeks of scoring during treatment, there were 32 conceivable patterns of consecutive ones and zeros.

Remarkably, certain patterns never appeared in the placebo group, but were relatively common during drug treatment.  Further, they were markedly similar to each other. Within this group, each string was initiatedby a zero, at any week, and was also rated zero forall subsequent weeks. The only exception was that this series never started at week one. There were patients whose initial score was zero but these inevitably went downhill. We were quite pleased with this result since it confirmed our clinical impressions - especially the persistence of benefit.

Note that this is overstated by Katz, who cites, the ”Quitkin et al. (1984) study showing that clinical actions of the antidepressants ‘lag’ several weeks behind the drug’s initial effects on central neurotransmitter systems”.

What is the subtext here? We guess that a certain model ofpathophysiology and repair of neural functioning during depression is at stake. It was discovered that imipramine rapidly blocksthe synaptic reuptake mechanism, delaying the exit of the neurotransmitters from the synaptic cleft. It was initially assumed that this excessive synaptic stimulus would relieve the brain of the functional decrement that underlay depression. (It was never quite clear why the excess neurotransmitter did not lead to receptor desensitization. Inhibitory afferent autoceptors were not part of the machinery yet). It followed that the antidepressant effect should be very rapid since the hypothesis was that the neurotransmitter deficit was directly manifested as depression. This fit well with simplistic advertising that strongly implied that a depression was due to a neurotransmitter deficit so that you had norepinephrine and serotonin depressions, as well as norepinephrine and serotoninergic therapies.

If there was a lag between drug administration and antidepressant effect, it conceptually demoted these neurotransmitters into being, at best, the first domino initiating a complex cascade involving who knows what.

Strangely this heuristic question relating the initial impact of medication to eventual clinical repair has gotten twisted into studies arguing for a quick medication effect, as if that corrected some misapprehension  Quitkin had generated. After all, Quitkin had not claimed a “several week delay” was necessary.

The supposed opiniondifference regarding onset gap has been further twisted to rest upon whether it can be shown that there is a statistically significant  drug superiority to placebo within the first week.

Now we can get into a highly technical, mathematical exposition concerning the power that would allow detection of a small drug - placebo difference at week one, the necessity for a multisite study, the increase in diagnostic error, deterioration of reliability,etc.However, fortunately, all of that is completely unnecessary .

Even if it were true, that under some circumstances medication was substantially better than placebo, during the first week of administration, it is certainly not the usual situation.

The majority of   drug responsive patients, even in all the cited studies that Katz believes affirms his position, achieve remission after several weeks - just as Quitkin et al. affirmed. The heuristic question has been answered - the gap exists. The immediate effects of antidepressants on neurons are insufficient for understanding the process of recovery.

Perhaps there are practical issues that hinge on whether there is an early therapeutic response or not. Katz has made three suggestions that depend upon the supposed ability of a small improvement during the first two weeks being highly related to a good eventual outcome. Further, if during the first two weeks there is not even slight evidence of improvement, it is extremely unlikely that this treatment will work. Therefore, switching treatments is a real option early during an unsatisfactory treatment. Also, since early response is so closely tied to the eventual outcome, there is no reason why the clinical trial cannot be radically shortened to say two and one half weeks, and enormous savings incurred.

One strange aspect of these studies is their lack of inclusion of a placebo group in these analyses, which are essentially within drug group predictive analyses. This, of course is highly problematic. Further, the numerical basis for many claims in this area is often obscure. We are fortunate that Katz has provided relevant data in: Katz MM, Berman N, Bowden CL, Frazer A. The componential approach enhances the effectiveness of 2-week trials of new antidepressants (J Clin Psychopharmacology 2011; 37: 193-218). 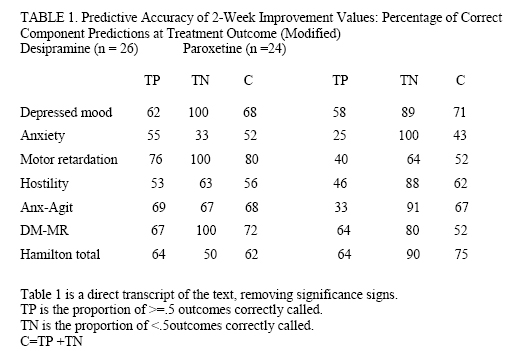 From this data the basic 2X2 table relatingearlysmall gains,>=20%, to later findings of substantial, >=50%, gain can be definitively reconstructed. See Table 2 (without rounding to nearest integer) or Table 2a.

Several findings then appear. The positive outcome proportions predicted are substantially less than those obtained. The proportion of subjects who do well is usually about 30% greater than the proportion predicted to do well. The claim that those who do well initially, will also do well later, is true but misleading. The undershoot invalidates the claim for a short clinical trial since the drug would be undervalued.

The claim that if the patient does poorly on all initial  variables,they will do poorly  later, cannot be evaluated since only individual variables are available. However for these individual variables, the chance of doing well despite poor initial performance is substantial for paroxetine but looks even better for DMI. Here the drugs are predictively devalued which casts doubt on the value of early treatment change, given initial disappointment. It would also seem likely that those who do poorly on all initial variables are only a small proportion of the sample and may also be quite atypical on other grounds.

It should be noted that a focus on the immediate effects of medication on neurotransmitters yields a supposedly promising, fairly narrow, pathway to the development of agents that will improve the process and thereby act therapeutically. On the other hand, if one has to deal with a complex cascade, our theory of depression becomes quite obscure and the directions that one can take in pursuing remediation appear all too many. As the development of antidepressants has been almost exclusively a matter of serendipity, it is plain that understanding pathophysiology and repair is still well beyond us. It seems unlikely that translational thrashing about, using limited current knowledge, will prove profitable.

To sum up, Katz has made a heuristic and several practical suggestions relating to clinical trials. These suggestions are not supported by his data. Similar re-analyses of data, whose current analyses claim to support Katz’s views, would be very worthwhile.